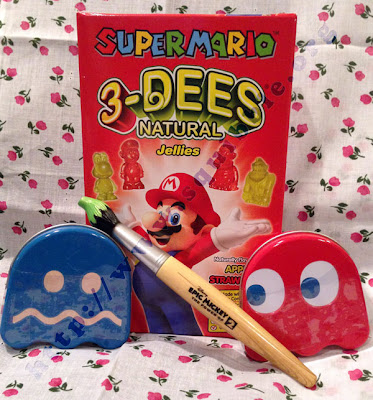 This review is long overdue! I had intended to do a voiceover for the vlog but in the end decided to upload the video as is. In January I visited to video game exhibitions in one week: Game Masters at Te Papa, and Arcade: Homegrown Video Games at the New Dowse.

To fit the theme, there is a small giveaway! I have a small prize pack, consisting of an Epic Mickey 2 pen, two tins of Pac Man Lollies, and a box of Super Mario gummi lollies. For a chance to to win, leave a comment below to let me know your absolute favourite video game of all-time!

This large exhibition arrived at Te Papa just in time for the school holidays, and runs until 28th April 2013. Game Masters was previously on display in Australia at the Australian Centre for the Moving Image.

I really enjoyed this large exhibition, there were a huge range of games on display ranging from original arcade machines of the 1970s all the way up to modern consoles and online MMORPG’s.

The only down-side to the afternoon was the amount of people! There were so many people there as it was the school holidays, and it was sometimes difficult to see everything.

Even so, the exhibition hall was full of interesting games, and with over 100 playable demos I had plenty to keep me busy.

I was given a bright blue wrist band on entry. These could be pressed against the info stations scattered around the exhibition. On the way out you turned in your wristband, and input your email address so you could receive extra background information about the games and the exhibition via email.

I was a big Sonic the Hedgehog fan, so it was great to see all the Sonic games, including a 3d version. I also got to try out the Nindendo 3ds which I had not seen in person before although it felt a little odd not having to wear 3d glasses in order to view the game.

I also enjoyed viewing all the concept art on display, which included beautiful art work and also 3d printed concepts. The Epic Mickey display was my absolute favourite however, as it included different kinds of Mickey Mouse memorabilia, and I am a big fan of the game.

There was also an entire section devoted to indie game developers, which included mobile game apps and browser-based games.

The weekend after, I visited The New Dowse which was hosting an exhibition focussed on games designed and developed by Kiwis, while this exhibition was much smaller, there was a great variety of styles.

The atmosphere was also very different, I wasn’t sure what to expect, but it was a relief to not have to navigate through crowds of people as I had done at Te Papa a few days before. Each exhibition space was darkened so that you could stop and focus on each individually lit game display, and try out the demos.

Loved this game, is claymation which is then made into a game. original models on dislay as well as animation/walk cycles and a playble demo. Models were design in NZ and hand-sculpted in NZ and in the UK.

Game developed to help children and teenagers develop coping measures and strategies to deal with depression.

I had a chance to make my own video game! Gamefroot is a platform made by Dan Milward. The aim is to make video game making accessible through the use of a drag and drop editor. I had a lot of fun dragging and dropping the prebuilt assets in order to make a very basic level.

I hope you enjoyed my first Vlog, hopefully I will have time to do a proper voiceover for the next one! Don’t forget to leave a comment below: let me know what your all-time favourite video game is!